In the early days, ravers to started party on Thursday and continued until well into the following week. Tuesday mornings were the best nights. Over 1000 people would flock down to a particular parking lot looking for one more rave after every other club had closed their doors. Those people were called the Cherry Mooneros, and the place was called: THE CHERRY MOON. 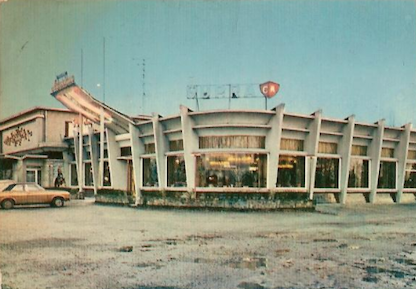 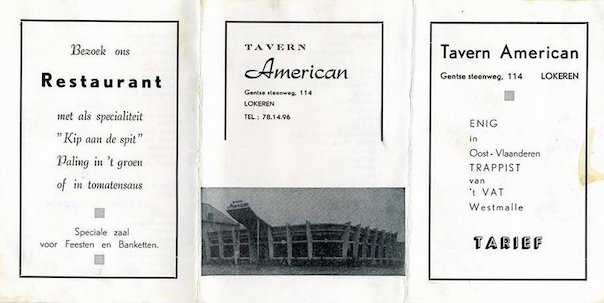 The complete Cherry Moon story, as told by founding father Rudy Pince, aka Papa Cherry: As a true music enthusiast, Rudy's adventure starts with the inception of Rudy's Music Shop in Sint-Niklaas in the '70s. Rudy was already ahead of the game, travelling to Chicago to find the best deals for his guitars and drums. Rudy's Music Shop grew fast, opening multiple branches and working with the most renowned brands, like CBS and Fender. After ten years, it was time for something new, and Rudy bought his first new wave discotheque: the Avant Garde in Sint-Niklaas. 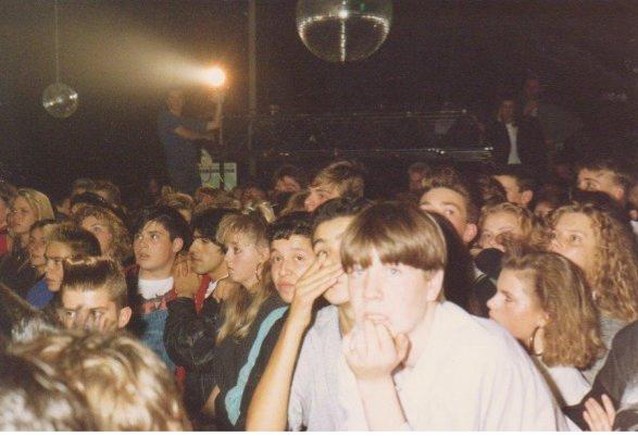 "In 1982, I joined the story of Rudy's Avant Garde as a DJ", says Nick Hertsens (52) from Sint-Niklaas. "It was a nightclub with a capacity of more than 900. I only played alternative music, so we got a very diverse audience: punks, new-wavers, rockers and men with quiffs - everyone found something they liked. We played music that you couldn't listen to anywhere else. We had a full house every weekend. Groups like Front 242, The Neon Judgment or TC Matic played their first gigs here." 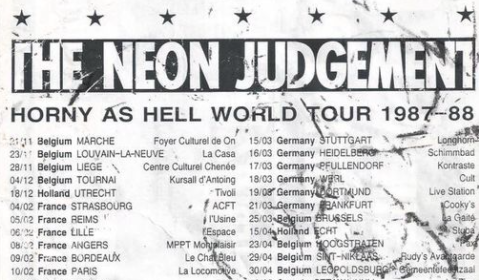 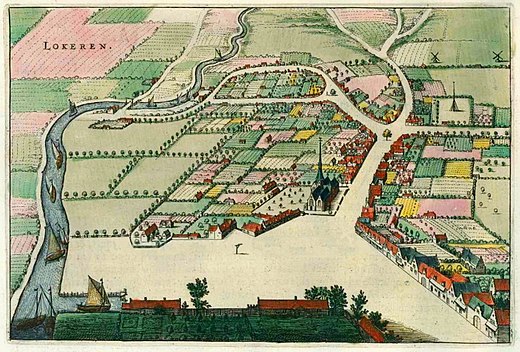 Rudy opened more nightclubs, like Rits and BBC, shortly after that, being the entrepreneur he is. But that wasn't enough. In 1991, he stumbled upon an old building that used to be a tavern with a Decap organ in Lokeren (a kind of predecessor of a discotheque) and felt raw, unprecedented energy. This is where the Cherry Moon chapter begins. 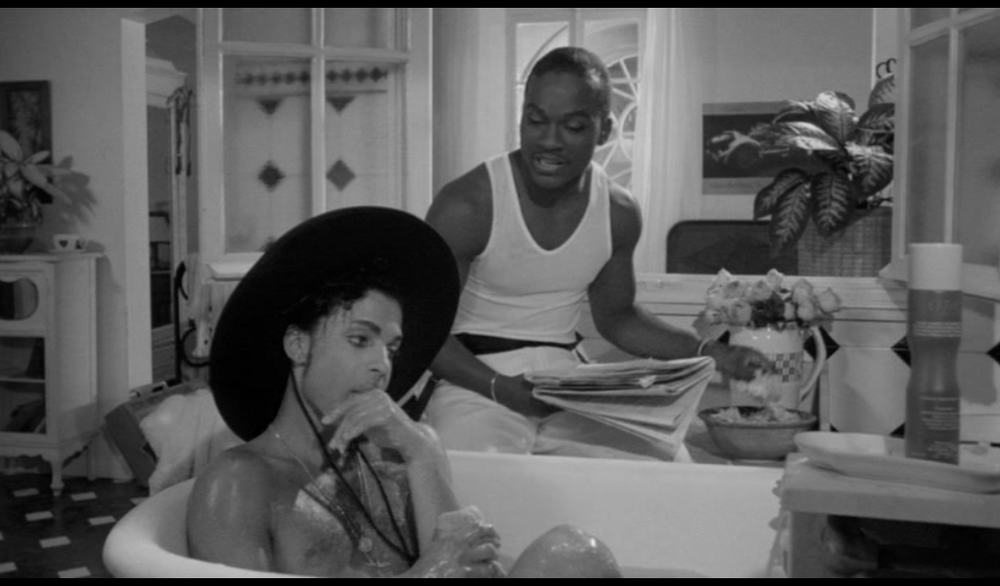 How did Cherry Moon get its name? "For black Americans of the older generations, seeing Under the Cherry Moon (a 1986 movie in which pop icon Prince featured) in a theatre was a rite of passage, right up there with being burned by a hot comb for the first time", says Hertens. "My sister Val and cousin Diane remember it clearly. Val saw it at Evergreen Plaza, where the management became so alarmed by the rapidly growing Prince-hungry mob that they let everyone in early—which is how she saw the last half of Labyrinth surrounded by a group of very confused black teens. Diane, the biggest Prince fan I know, remembers sitting in the theatre in utter shock. The movie was scored by a musical genius but was painfully bad to watch. Prince is a brilliant musician and dancer, but a horrible actor! But it's hilarious if you don't take the movie too seriously." 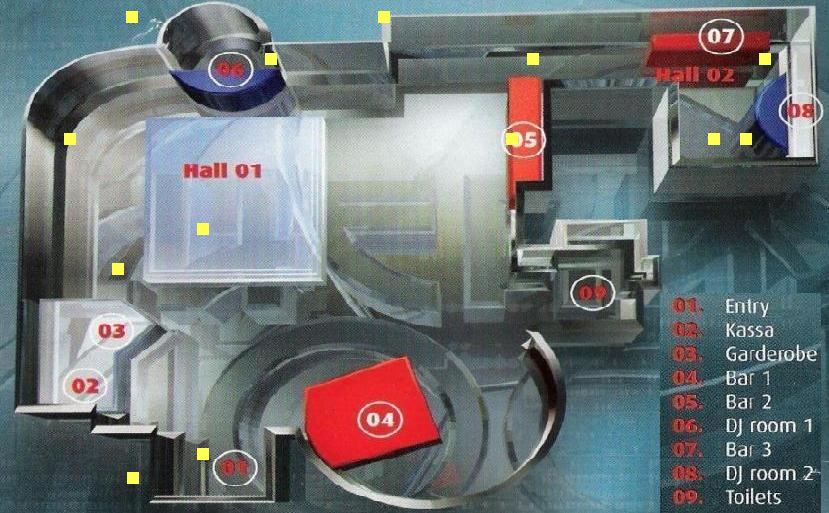 "When I visited the building for the first time, it was just an empty concrete bunker", says Rudy Pince. "But I could feel a special energy. Something told me: let's do it!" 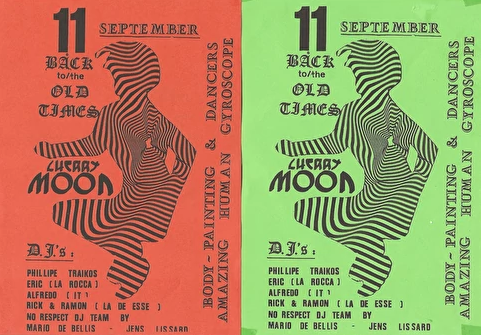 When Cherry Moon opened in 1991, the resident DJs mostly played New Beat, which had been over-commercialized by this time, resulting in empty dancefloors every weekend. One night, the team decided to go in a different direction and give techno a try. It was an instant hit. Cherry Moon was filled with over 3000 people every week, not even two months later. DJs like The Fly, Yves Deruyter, DJ Ghost, Franky Jones, Deg, Tofke and Youri Parker were part of the success. 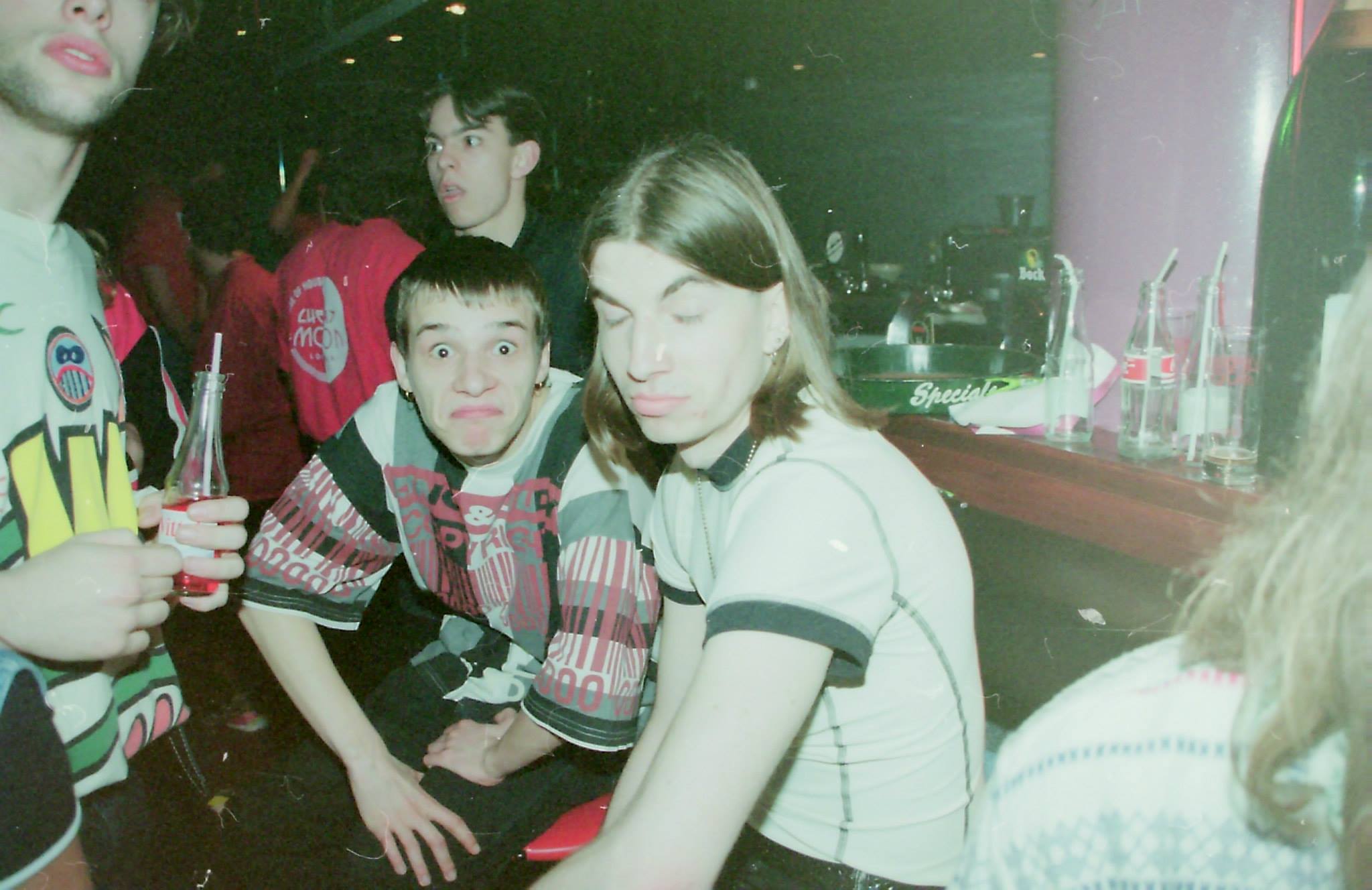 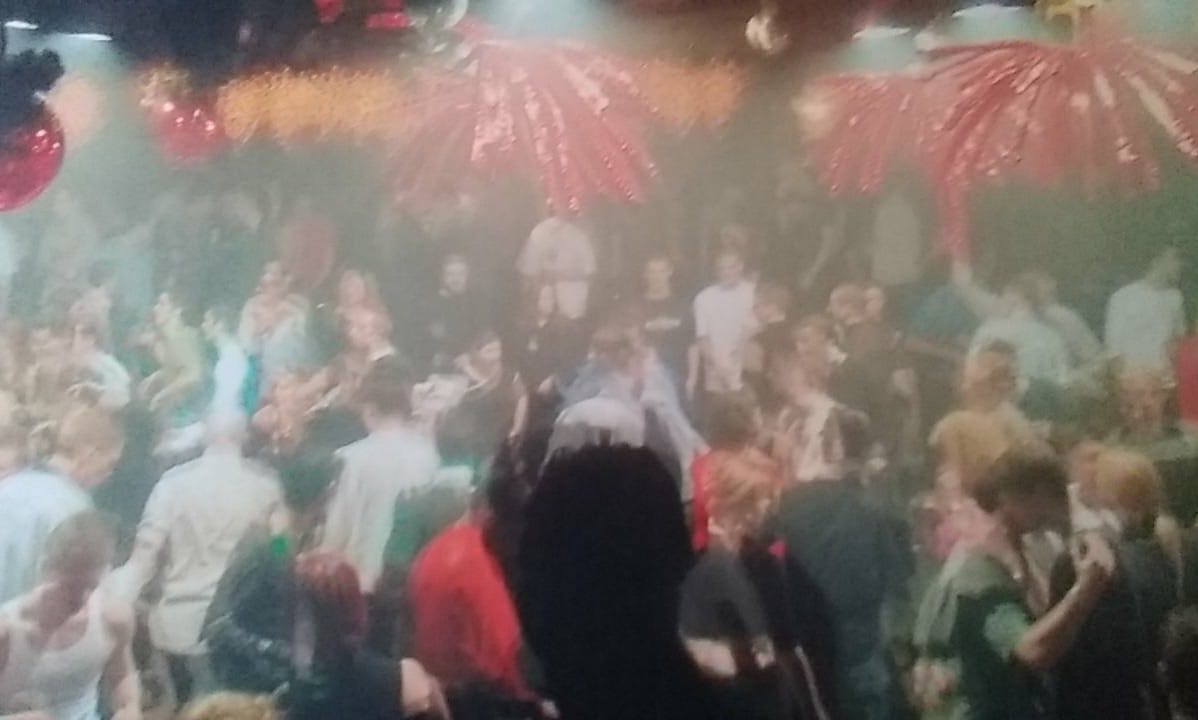 "I was 17 years old, and I used to go to Cherry Moon every week. "I danced the whole night, and sometimes I lost two kilograms of weight on the weekend. I only drank soda and cola. These drinks cost me a fortune, so I was selling pirated techno CDs in high school to afford the weekend" - an anonymous Cherry Moonero. 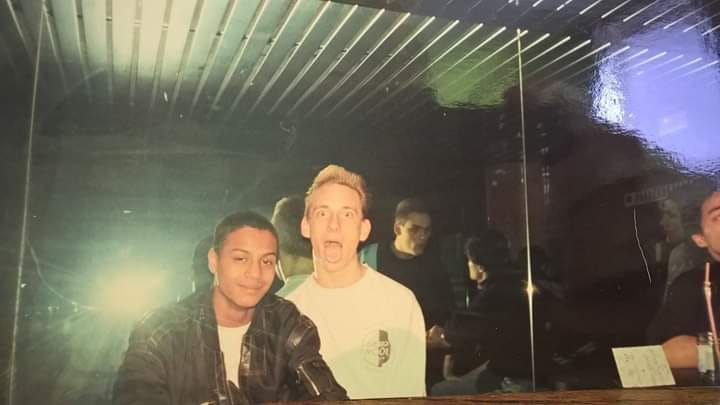 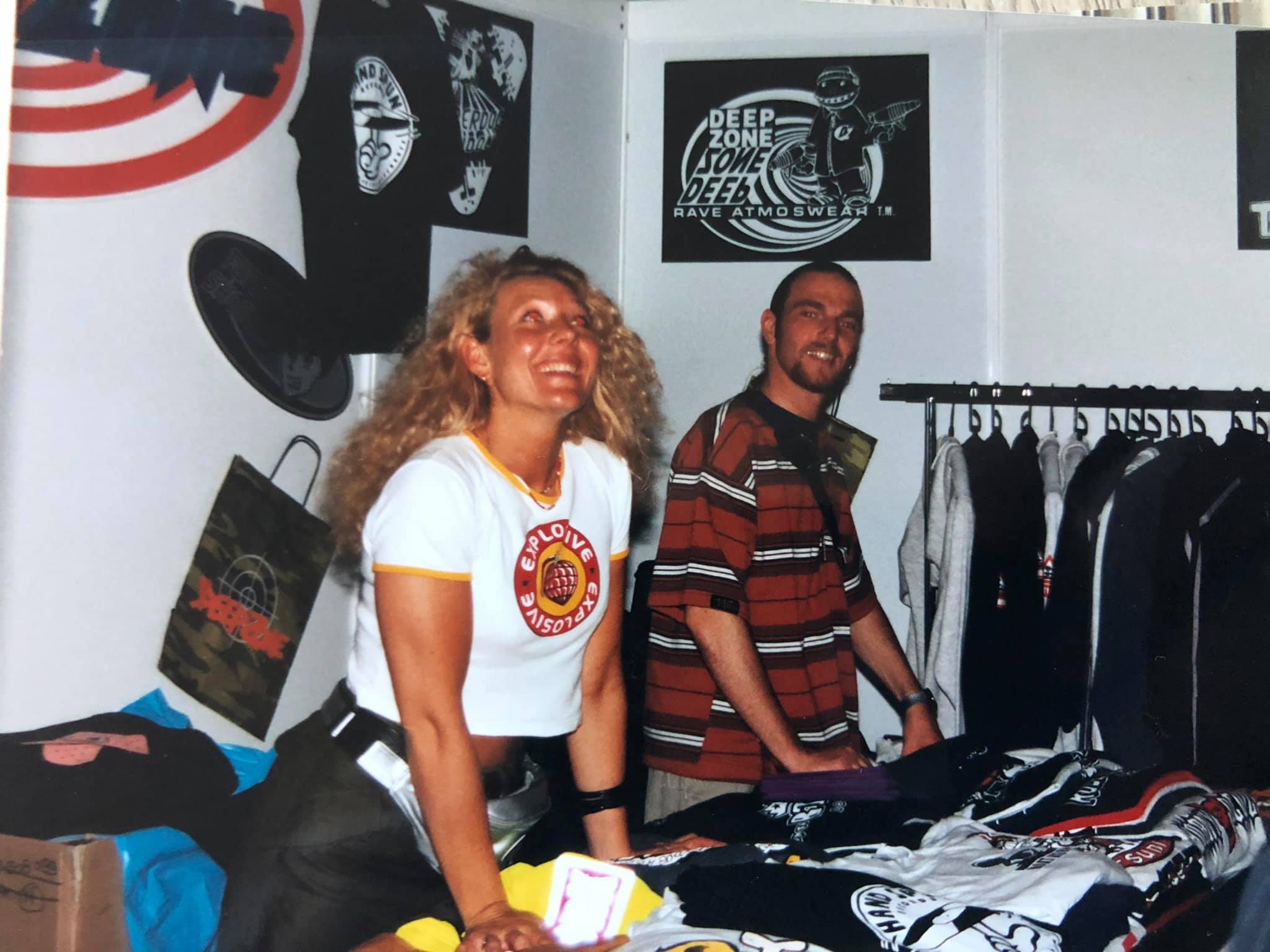 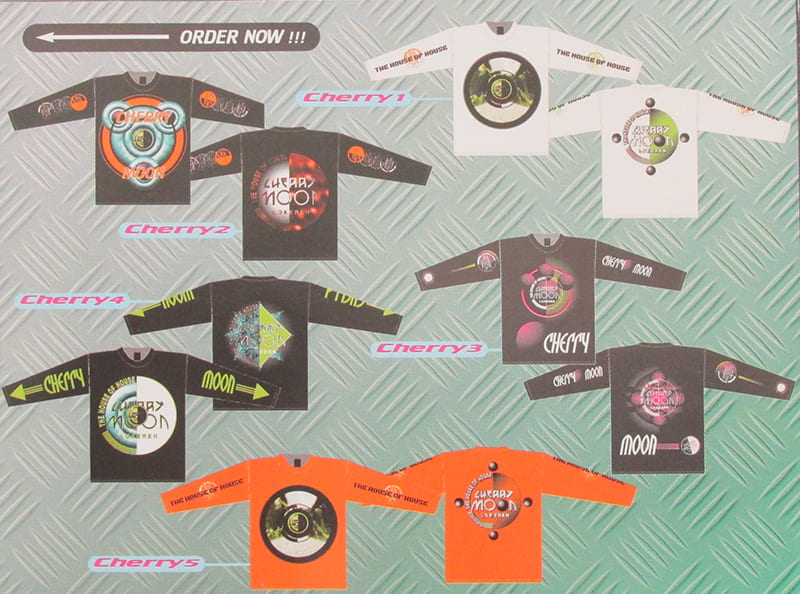 Other than drinks and tickets, Cherry Moon sold tons of iconic merchandise. "At our peak, we sold 35.000 copies of our compilation CD and 500 t-shirts in a week. Those numbers are unimaginable today", tells Rudy Pince. 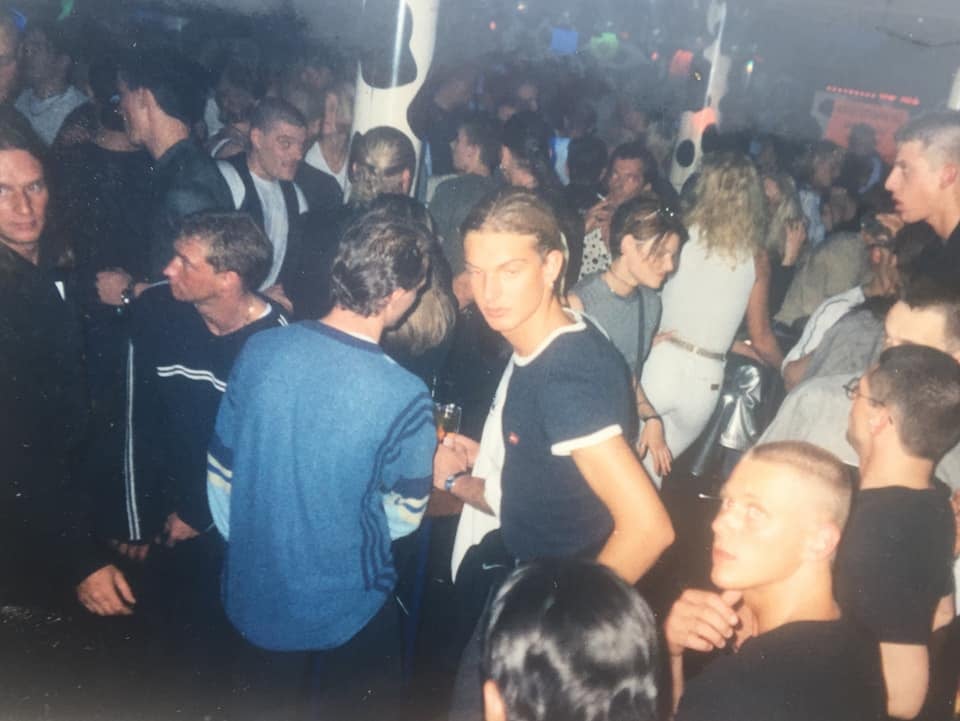 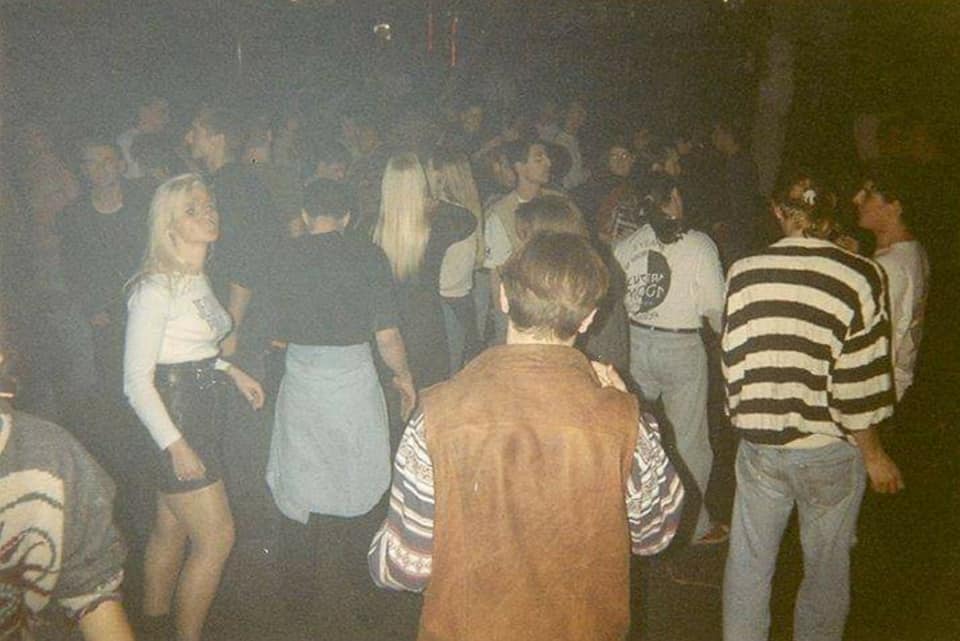 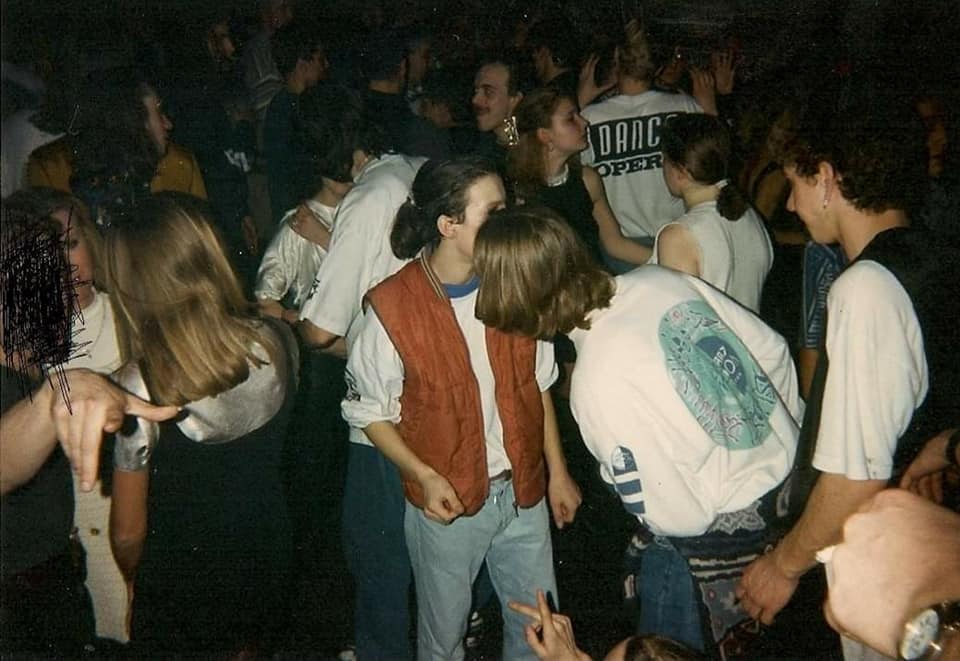 "As a small kid growing up in Lokeren, there was a rumour that people slept inside the subwoofers at Cherry Moon. I didn't believe it until I visited the club for the first time ten years later. Then, I saw it with my own eyes! The subs of the 60.000-kilowatt sound system were so big you could walk in - and people even hung out there. Even when you pulled up to the parking lot, the whole place was shaking! Going into the subwoofers felt like a real scuba dive. One decade later, I found out that Cherry Moon was the reason for my tinnitus problem" – an anonymous Cherry Moonero. 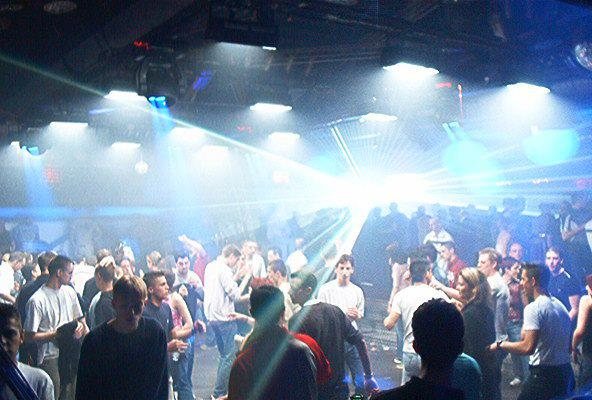 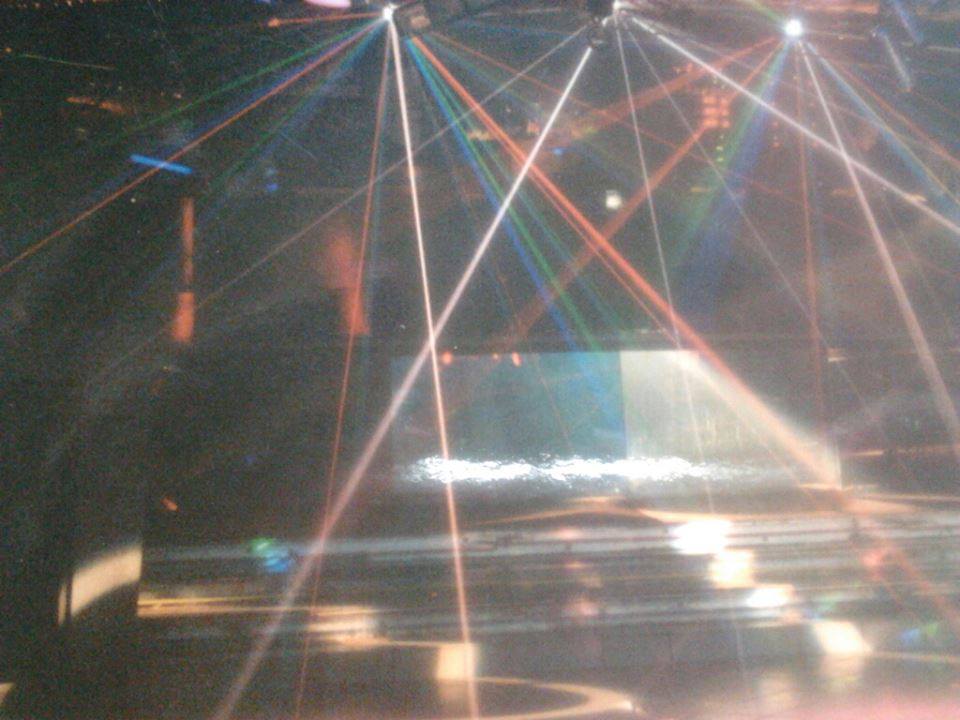 "Experiencing the sound system wasn't the only life-changing feature of the club - the light show was incredibly hypnotic. First, they had this ridiculously expansive strobe light system synced on the music with every four beats. Then, they had twisting lasers that reflected in the mirrors behind the bar. This combination was insane, unlike anything any of us had seen. These neon lights and warm-coloured spotlights made the 90s club experience special. Soon, LED light was invented, and it was all over" – an anonymous Cherry Moonero. 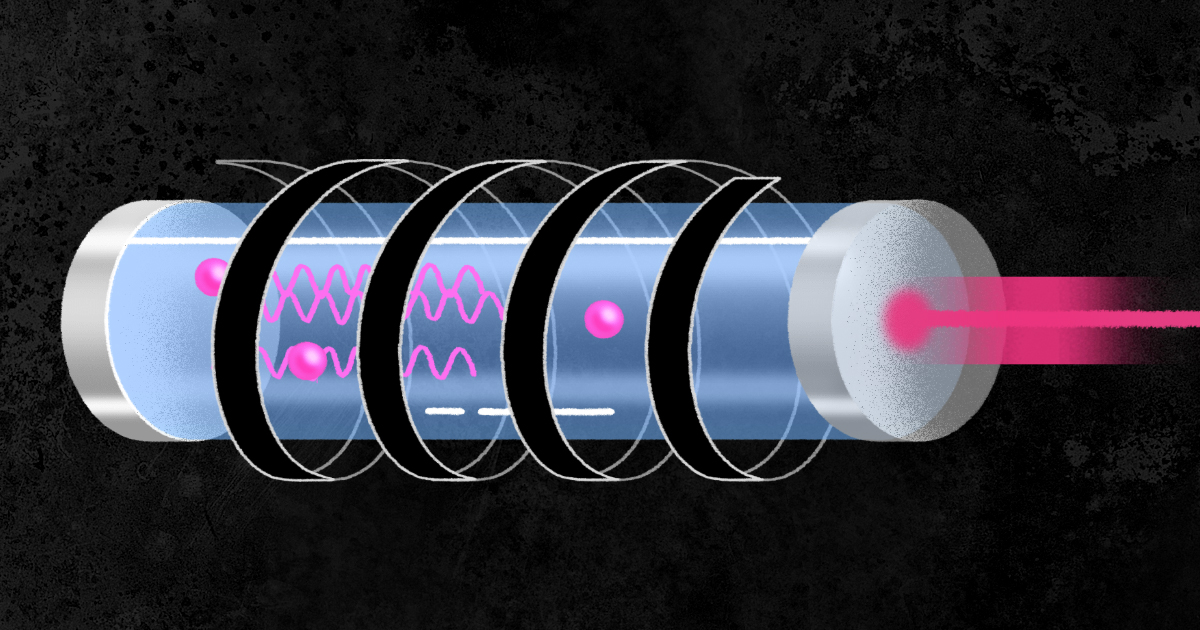 The letters in the word laser stand for Light Amplification by Stimulated Emission of Radiation. A laser is an unusual light source. It is quite different from a light bulb or a flash light. Lasers produce a very narrow beam of light. This type of light is useful for lots of technologies and instruments—even some that you might use at home!

However, we have figured ways to artificially create this special type of light. Lasers produce a narrow beam of light in which all of the light waves have very similar wavelengths. The laser’s light waves travel together with their peaks all lined up, or in phase. This is why laser beams are very narrow, very bright, and can be focused into a very tiny spot. 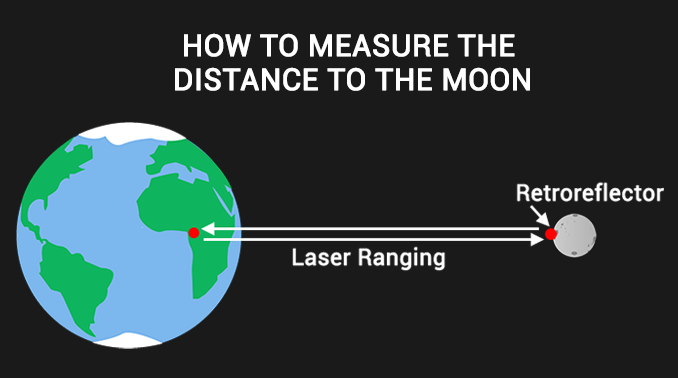 Because laser light stays focused and does not spread out much (like a flashlight would), laser beams can travel very long distances. They can also concentrate a lot of energy on a very small area. Scientists have even measured the distance between the moon and Earth using lasers! By measuring the amount of time it takes for a laser beam to travel to the moon and back, astronomers can tell exactly how far away it is! 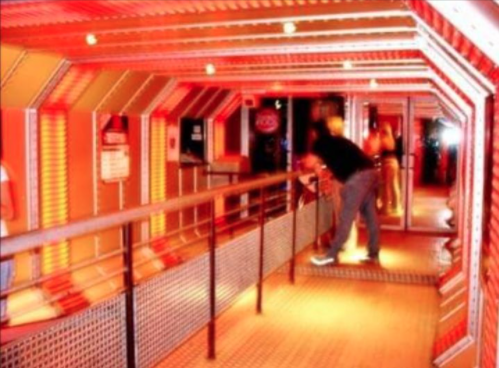 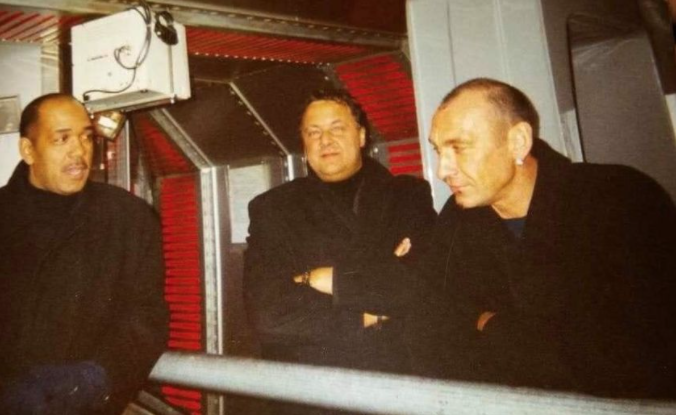 "When I worked as a police officer for the B.O.B. (Belgium's Special Investigation Force), we used to visit Cherry Moon during boring nights at the base. We would enter with our license and then just sit at the bar, enjoying the beautiful people and listening to amazing music. You should have seen these faces of the drug dealers on the dance floor." – An anonymous Cherry Moonero. 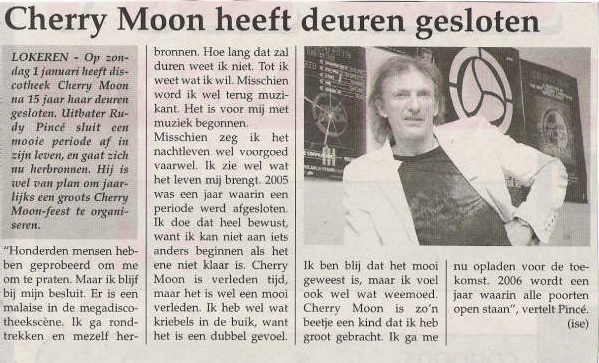 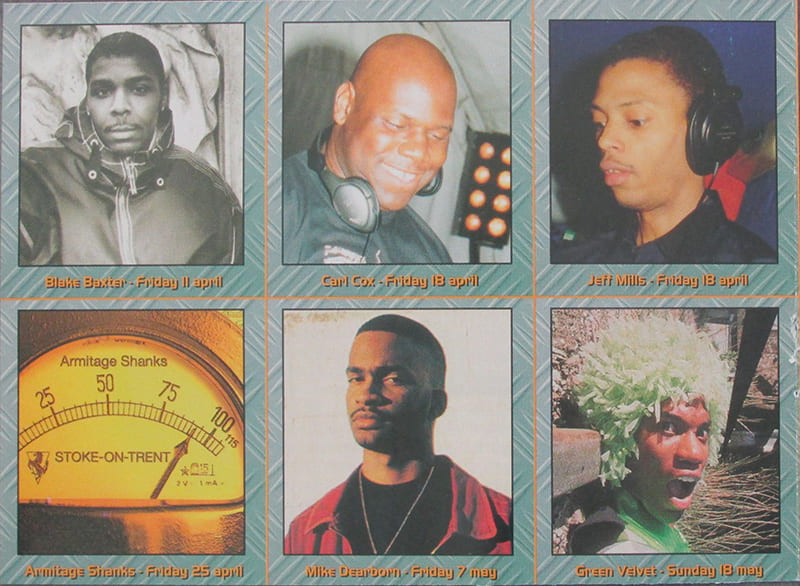 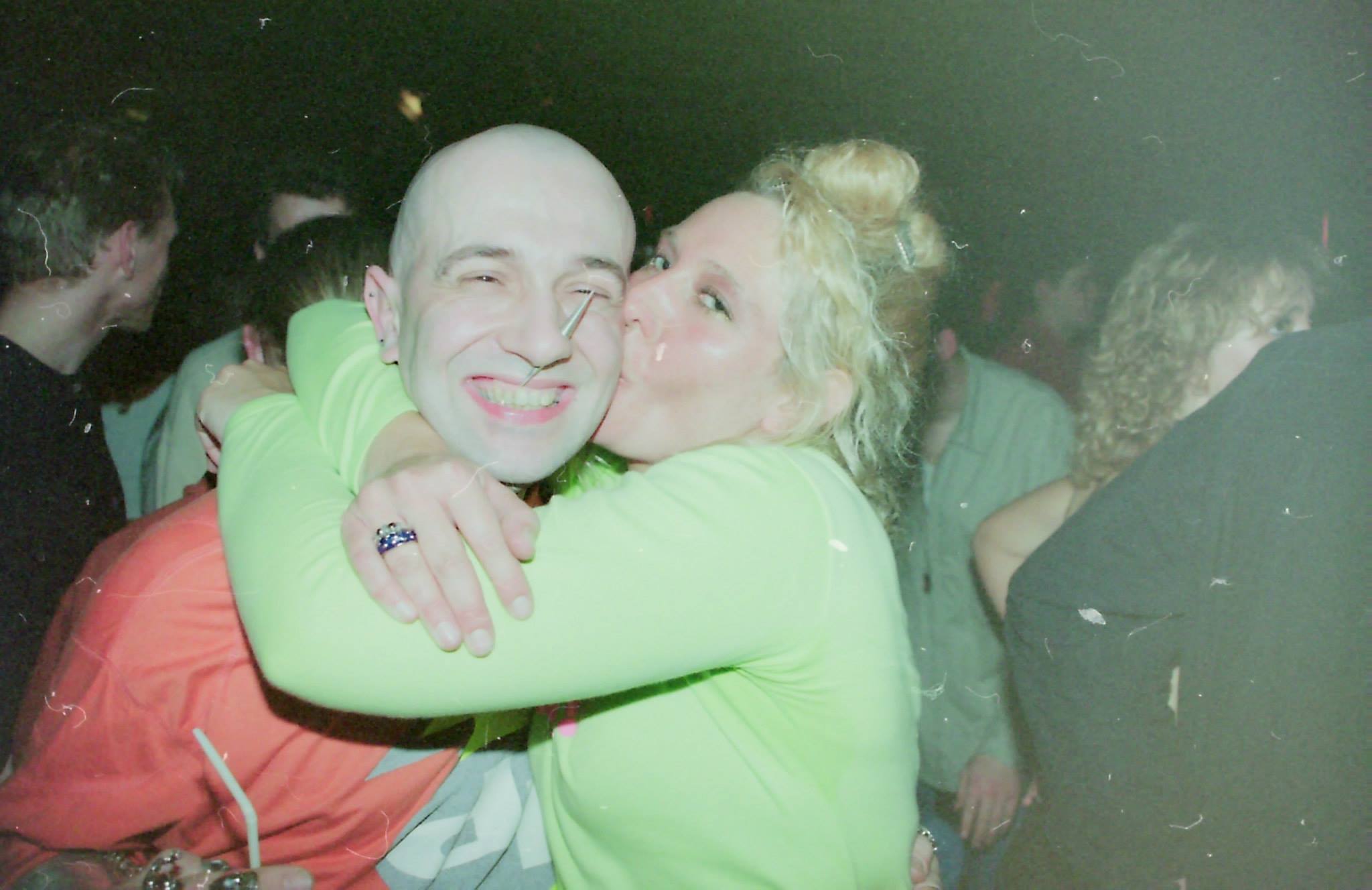 Cherry Moon's initial success (between 1992 and 1994) went hand in hand with the rise of XTC culture, and the club became an obvious target for the authorities. Just like all the other major Belgian discotheques of the time, the venue became the victim of one razzia after another. Still, this couldn't stop the movement - until the mayor of Lokeren found a way to close the venue for disturbing the public order. This presented a golden opportunity for other clubs that now wanted to tap into the market.

Perhaps Belgium's most popular discotheque at the time, Boccaccio, was just fifteen minutes away from Cherry Moon, but it had one problem. Boccaccio dealt with an unhappy mayor who forced the club to close after 5 AM on Tuesday mornings. "Their owner asked me to open Cherry Moon at such an unusual time of the week, so he could send everyone to us once Boccaccio closed", explains Rudy. "We had to accommodate hundreds of ravers looking for the next party – and so we did." In a way, this was the first version of what would be called an after club today.

Three months after closing, in 1994, Cherry Moon was allowed to open again. The closure by the local authorities resulted in one thing only; the club was more popular than ever before. It grew to unseen heights, with people coming from all over Europe. The regulars were called the Cherry Mooneros, some of them even tattooed the logo on their bodies. Paul Woolford, Sven Vath, Marishka, Carl Cox, Felix Da Housecat, Jeff Mills, Westbam, Miss Djax are only a couple of international artists that played behind the decks of Cherry Moon.

"We didn't enjoy a good reputation, but no one ever died of excessive drug use in our club." 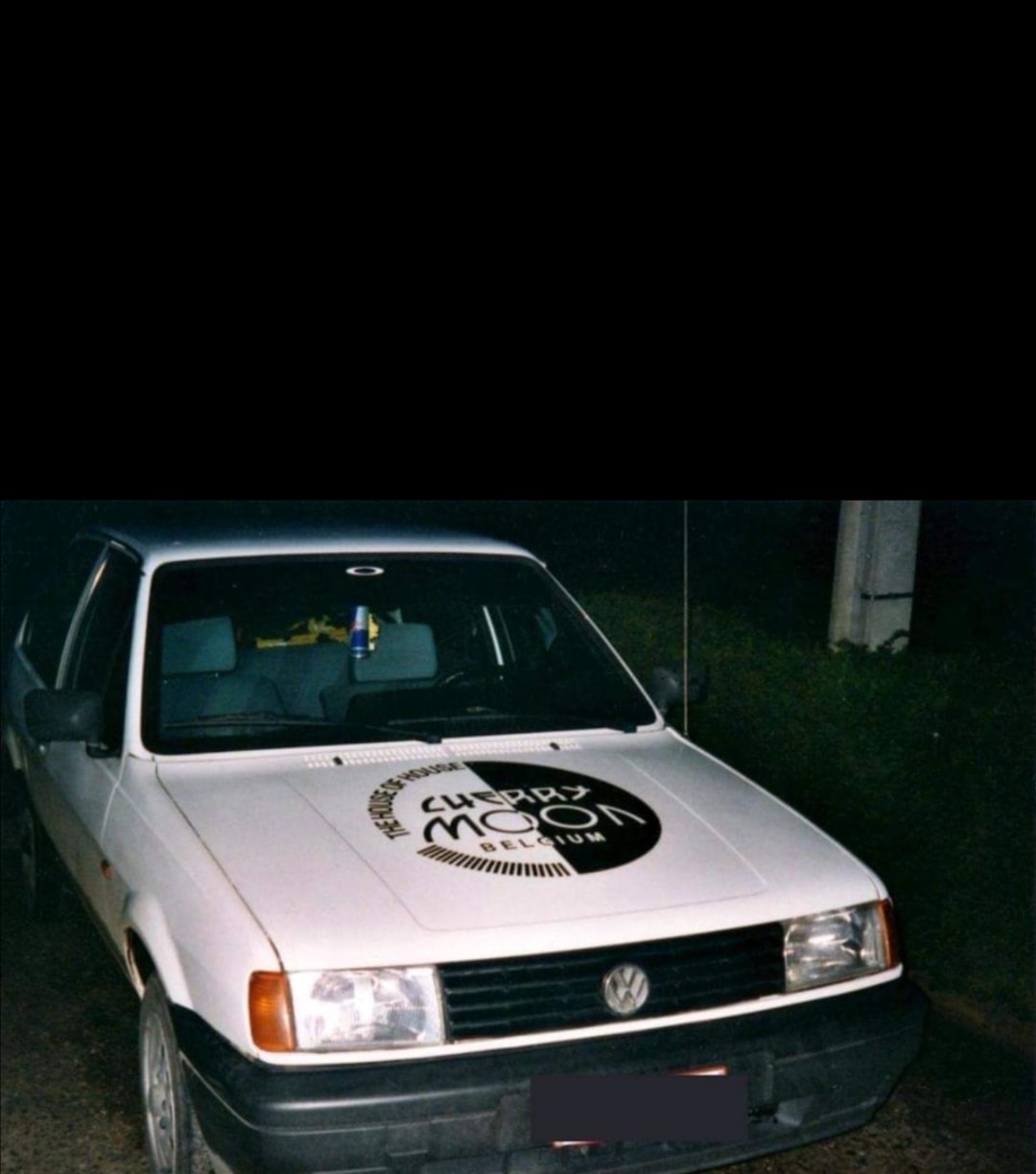 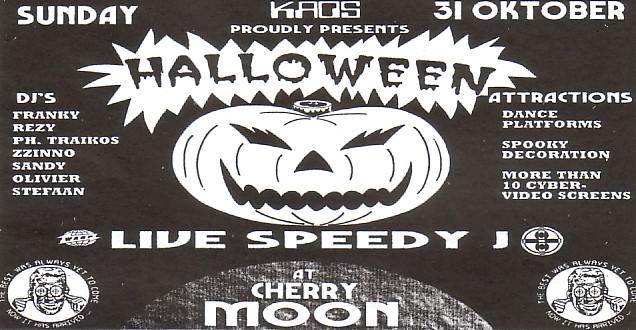 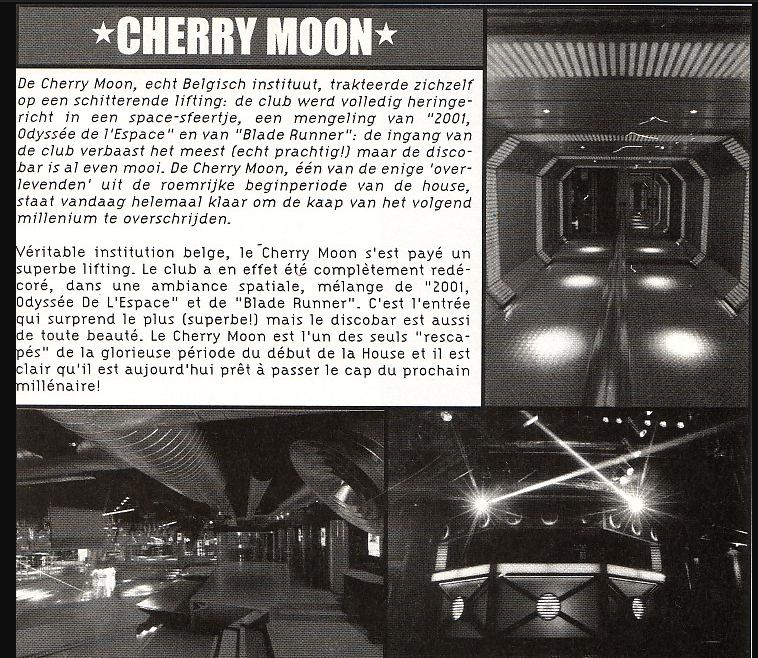 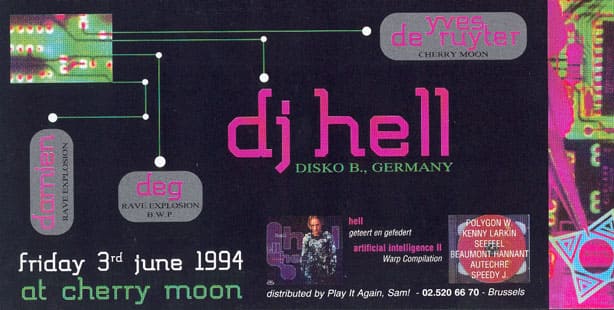